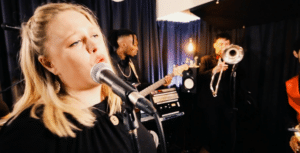 Looking for an international mix of Music Genres for your party?

Then you need to check out the coolest new act on the scene called Boogie Heights. They are a brand new young Irish based Wedding & Party Band featuring an International mix of fast-rising stars direct from Italy, Uk, Africa, and Ireland. These musicians are ex BIMM Music College and even from the prestigious USA Berkley College.  Their incredible live performances and videos below show them at their best with the full line up including Female Lead Vocals, Backing Vocals + Drums, Bass, Guitar, Piano, Sax + Trumpet. You can book the band directly here, at direct prices from a 5pc to 7pc by adding a brass section ie…( Sax + Trumpet ) to boost that awesome sound they deliver.

As musicians, they have played festivals such as Electric Picnic, Body & Soul, Barndance, Longitude, & UK festivals.
Working alongside “X collective” collaborating alongside artists and bands such as Shookrah, Tolu Makay, Zapho, Gemma Bradley, Elkae, etc. and including film work and Live video performances for the New York Arts Center with Toshin for ” The X Collective” live videos in Sun Studios.

Boogie Heights are the perfect party or covers band for Weddings, Drinks receptions, and Corporate Events. They perform 2 hrs of music across all genres and they will transport you back in time with all the massive hits from the 70s, ’80s, ’90s, ’00s, Hip Hop, Soul, Chart, and Contemporary. It’s an interactive Setlist from Pop to Rock to Hip Hop!

Right now the band are currently offering brilliant deals on Band & DJ for weddings in 2021, 2022. To book this Amazing Fun Party band with a difference as Exclusively represented by www.audionetworks.ie. Call + 353 1 201 3660 or email us at……  [email protected]

Bee Gees – You should be dancing
The Jackson’s – Blame it on the boogie
Earth Wind & Fire – Lets Groove
ACDC – Back in Black
Stevie Wonder – Don’t you worry bout a thing
Tears For Fears – Rule the world
Billy Ocean – When the going gets tough
Prince – I want to be your lover
Michael Jackson – Bille Jean
Indeep – Last night a DJ saved my life
Moloko – Sing it Bank
Ben E King – Stand by me – A
Out Cast – Hey Ya!
K-Ci & Joe Joe – All my life
Corrine Bailey Rae – Put your records on
Boney M – Sunny
Chakakhan Aint’ nobody – Ebm
Gorillaz – Clint Eastwood
Out Cast – Prototype
Redbone – Come and get your love
Erykah Badu – On and on
Erykah Badu – Orange moon